Oil Shortage Feared by 2020 as Discoveries Fall to Record Low

LONDON—Global oil discoveries fell to a record low in 2016, the International Energy Agency says, raising fresh concerns about the potential for a petroleum-supply shortage as soon as 2020.

The IEA—a Paris group that monitors energy trends for oil-dependent places like the U.S. and Europe—is stepping up its warnings about historically low oil-industry investment during the latest price downturn. Oil companies and producing nations curtailed spending by hundreds of billions of dollars during the price rout, resulting in the fewest new conventional oil projects being sanctioned in 2016 since the 1940s, the IEA said.

The group’s assessment, shared with The Wall Street Journal ahead of a full investment report to be released in July, represents its most comprehensive study yet of how the downturn has already negatively affected spending. The IEA doesn’t forecast oil prices, but any shortage would likely cause significant crude-price increases.

Don’t expect output from U.S. shale producers to fill the void, the IEA said. American shale production is expected to grow by 2.3 million barrels a day or more over the next five years, but that isn’t enough to make up for declining output elsewhere.

“The key question is how long can the surge in U.S. shale supplies make up for the declining pace of growth elsewhere?” said IEA executive director Fatih Birol. “We are worried about historically low discoveries and new projects.” 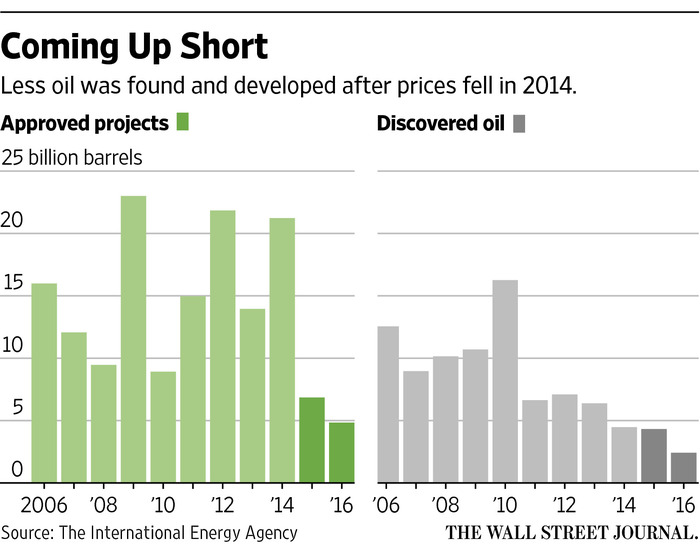 The Organization of the Petroleum Exporting Countries has also sounded the alarm over the potential for a looming supply gap in the long term. Saudi energy minister Khalid al-Falih told a London energy conference last year that “there will be a period of shortage of supply.”

According to estimates from The Rapidan Group, a Washington-based energy policy advisory firm, oil prices could hit $100 a barrel in 2022, squeezed by supply constraints and stronger-than-expected demand growth.

“If you put those two things together, then you get a boom phase,” said Robert McNally, president of the Rapidan Group.

But in the near term, the oil industry and traders aren’t concerned about a shortage.

Many banks have reduced their oil price forecasts for the coming years in recent months, expecting resurgent production from shale drillers. According to a March survey by The Wall Street Journal, analysts expect oil prices to stay below $60 a barrel for the third year in a row in 2017. By 2019, that is expected to rise modestly to $68 a barrel, but that is still much lower than the $76 a barrel banks were forecasting a little over a year ago.

Last year, when still chief executive of Exxon Mobil, Secretary of State Rex Tillerson threw cold water on forecasts of a massive supply crunch because of the resilience of the shale industry in the U.S.

“Never bet against the creativity and tenacity of this segment of our industry,” Mr. Tillerson told the Oil & Money conference in London last October.

Certainly costs in the shale industry have come down. The average break even prices for the Permian basin in Texas is now between $40 and $45 a barrel, according to the IEA. The price was near $90 just two years ago. That is helping to drive a booming recovery in activity in the region.

The IEA said the oil industry’s massive pullback from exploration and development of new projects will undercut shale.

Shale “is not enough by itself,” the IEA’s Mr. Birol said.

To meet rising demand and offset underlying declines, the industry needs to approve production of around 18 billion barrels of new resources each year between now and 2025, according to the IEA. If business doesn’t pick up this year, the volume of new conventional oil production that will need approval to keep pace with demand and offset underlying declines rises to just under 21 billion barrels a year.

2020.05.22
27
Shell offers staff voluntary severance pay
As the price of a Brent barrel is trading at nearly half of what it was at the beginning of the year…

2020.05.18
896
Oil highest since March as Chinese demand reaches 13 MMbpd
Oil rose to the highest in two months as demand in China returned to near pre-virus level and output…
Market quotes are powered by TradingView.com