Cement head - A device fitted to the top joint of a casing string to hold a cement plug before it is pumped down the casing during the cementing operation.
Float collar - A component installed near the bottom of the casing string on which cement plugs land during the primary cementing operation. It typically consists of a short length of casing fitted with a check valve. This device may be a flapper-valve type, a spring-loaded ball valve or other type.

Guide shoe - A tapered, often bullet-nosed piece of equipment often found on the bottom of a casing string. The device guides the casing toward the center of the hole and minimizes problems associated with hitting rock ledges or washouts in the wellbore as the casing is lowered into the well.
Cement plug -A rubber plug used to separate the cement slurry from other fluids, reducing contamination and maintaining predictable slurry performance. Two types of cementing plug are typically used on a cementing operation. The bottom plug is launched ahead of the cement slurry to minimize contamination by fluids inside the casing prior to cementing. A diaphragm in the plug body ruptures to allow the cement slurry to pass through after the plug reaches the landing collar. The top plug has a solid body that provides positive indication of contact with the landing collar and bottom plug through an increase in pump pressure. 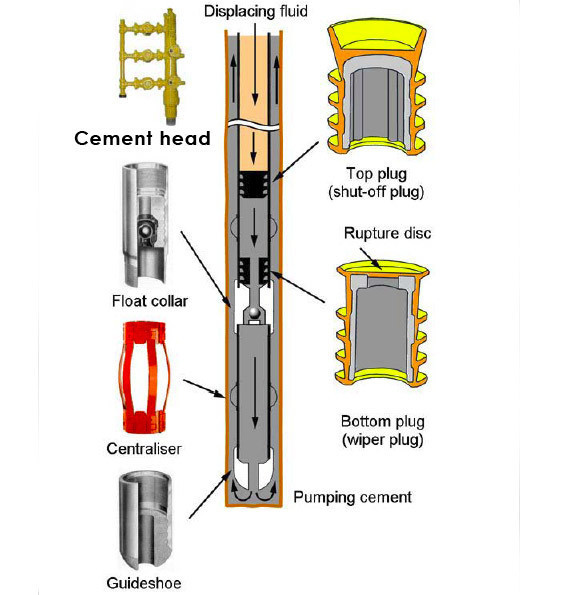 2020.04.19
1 166
Bottomhole Assembly
The bottomhole assembly (BHA) is the component of the drill string located directly above the drill…