Porosity is a measure of the void space within a rock, expressed as a fraction (or percentage) of the bulk volume of that rock. To be commercially productive, a reservoir must have sufficient pore space to contain a appreciable volume of hydrocarbons. Porosity defines the storage capacity of a sedimentary formation for oil, gas and water. The general expression for porosity is:

Vb = Bulk Volume of the Rock

Geologically, porosity has been classified in two types, according to the time of formation. 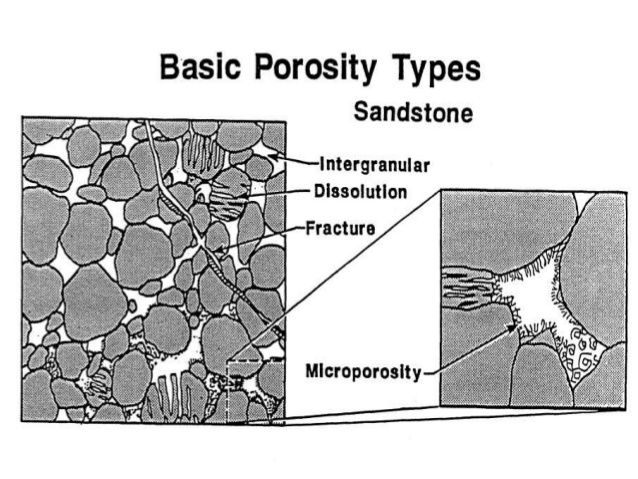 Porosity formed at the time the sediment was deposited. The voids contributing to this type are the spaces between individual grains of the sediment. Primary porosity is a function of the packing, sorting, rounding, compaction and cementation effects. It is intergranular porosity of sandstones and the oolitic or intercrystalline porosity of carbonates.

Porosity formed after the sediment was deposited. The magnitude, shape, size and interconnection of the voids bear no relation to the form of the original sedimentary particles. Secondary porosity has been divided into three classes based on the mechanism of formation.

Solution Porosity - Voids formed by the solution of the more soluble portions of the rock by percolating surface and subsurface waters. Inconformities in sedimentary rocks are excellent targets for zones of solution porosity.

Fractures, Fissures and Joints - Voids formed by the structural failure of the rock under loads caused by various forms of diastrophism, such as folding and faulting. This type of porosity is extremely hard to evaluate due to its irregularity.

Dolomitization - Voids formed when limestone is transformed into dolomite. Porosity formed by dolomitization is due to the solution effects enhanced by a previous chemical change in limestone.

It is wrong to assume that there is a unique minimum porosity cut off which defines all reservoir rocks. A typical value for a clean, consolidated and reasonably uniform sand is 20%. A rough average for carbonate rocks is 6 to 8%. Remember though, these values are approximate and will not fit all situations. 2020.10.14
1 191
Factors affecting the capacity to make a hole
Pressure (as stated previously) is often expressed in kilopascals, tonnes per square centimetre, or…