December 26, 1905 — Henry Wehrhahn of Brooklyn, New York, receives two 1905 patents that will lead to the modern 55-gallon steel drum. He assigns them to his employer, Nellie Bly of the Ironclad Manufacturing Company. “My invention has for its object to provide a metal barrel which shall be simple and strong in construction and effective and durable in operation,” Wehrhahn notes in his patent for a flanged metal barrel with encircling hoops to better control when rolling.

A second patent – issued at the same time – provides a means for readily detaching and securing a lid.

A superintendent at Ironclad Manufacturing, Wehrhahn assigns his inventions to Elizabeth Cochrane Seaman (Nellie Bly). She is the recent widow of the company’s founder; at age 30 in 1895 she had married the wealthy 70-year-old industrialist Robert Seaman.

Well-known as a reporter for the New York World (in 1889, the newspaper had sent a 25-year-old Bly on a steamboat trip around the world to mimic Jules Verne’s Around the World in Eighty days), Bly manufactures early versions of the Wehrhahn “Metal Barrel.” It will become the 55-gallon steel drum.

Wehrhahn moves on to become superintendent of Pressed Steel Tank Company of Milwaukee, Wisconsin. Iron Clad Manufacturing eventually succumbs to debt, and Bly returns to newspaper reporting. She dies at age 57 in 1922.

Photo: Nellie Bly was assigned a 1905 patent for the “Metal Barrel” by its inventor, Henry Wehrhahn, who worked at her Iron Clad Manufacturing Company. 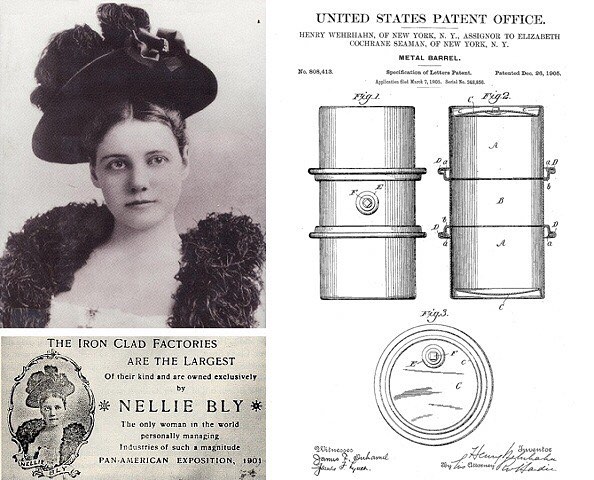 2020.01.25
405
Drilling objectives
The Statements clearly set out the objective. It is important that statements are clearly worded so… 2020.01.01
518
Sweet and Sour Crudes
Crude oils are often classified according to their density and their sulfur content.
Market quotes are powered by TradingView.com