How do we control hole angle?

In the early 1950s, Woods and Lubinski collaborated in mathematical examination of the forces on a rock bit when drilling in an inclined hole. In order to make their calculations, they made three basic assumptions:

1. The bit is like a ball and socket joint, free to turn, but laterally restrained.

Consequently, the forces which act upon the bit can be resolved into:

1. The axial load supplied by the weight of the drill collars. 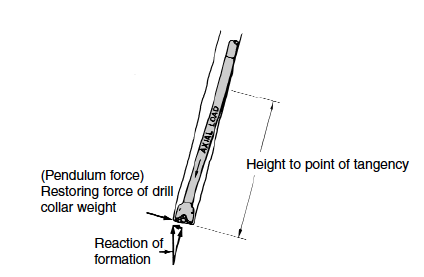 This work made it possible to utilize gravity as a means of controlling change in the hole angle. Special tables were prepared to show the necessary weight for the bit to maintain a certain hole angle. These tables also show the proper placement of a stabilizer to give the maximum pendulum force and the maximum weight for the bit. The effects of using larger drill collars can also be determined. 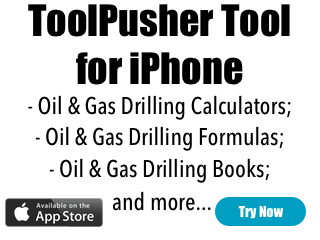 Most people today use a packed hole assembly to overcome crooked hole problems and the pendulum is used only as a corrective measure to reduce angle when the maximum permissible deviation has been reached. The packed hole assembly is sometimes referred to as the “gun barrel” approach because a series of stabilizers is used in the hole already drilled to guide the bit straight ahead. The objective is to select a bottom-hole assembly to be run above the bit with the necessary stiffness and wall contact tools to force the bit to drill in the general direction of the hole already drilled. If the proper selection of drill collars and bottom-hole tools is made, only gradual changes in hole angle  will develop. This should create a useful hole with a full-gage and smooth bore, free from doglegs, key seats, offsets, spirals and ledges, thereby making it possible to complete and produce the well (see Figure No. 2). 2020.06.28
203
Winch and brake capacity
A winch or hoist unit (often called drawworks on some rigs, including oil and gas rigs) usually cons… 2020.06.20
228
How to Convert Diameters from Fractions into Decimals
Easy and correct calculation version
Market quotes are powered by TradingView.com